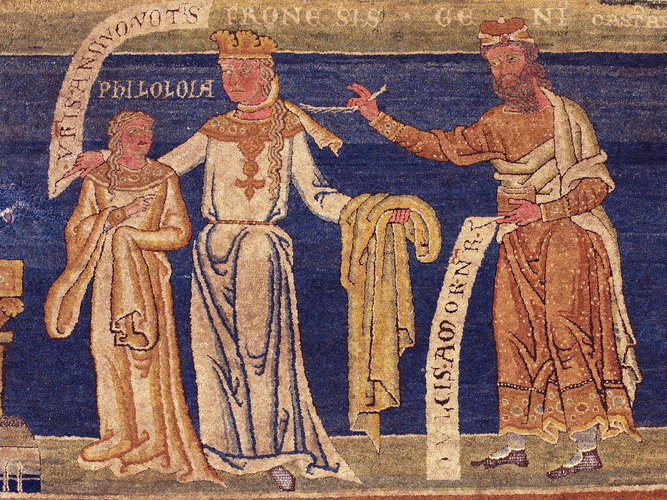 More than just an abbess - what offices existed in a ladies' convent?

Offices of a medieval convent of ladies

"In the Middle Ages, for women, the form of life in a religious community alongside marriage was considered a desirable realization of life ideas and patterns, which was idealized, even ideologized, by late antique and early medieval patristic literature. For women from the upper social classes, life in a noble women's convent was seen as the adequate form of life before and after marriage."

Looking at ecclesiastical communities of the Middle Ages, it is noticeable that a clear determination of whether this was a monastery or a convent is difficult. The terms monasterium, coenobium or ecclesia used in the sources do not help in the identification, especially for the early period. Within research, therefore, the phrase "women's community" or "women's commune" is generally chosen.

Is there any difference at all between a monastery and a convent?

"The difference is that in a convent vows are taken to spend one's life in chastity, poverty and obedience. In a convent, on the other hand, members were allowed to have their own property and staff; they could also leave the community, e.g. to marry.“

Life in spiritual institutions of the Middle Ages was subject to a fixed daily routine and structure. Thus, there was an internal, hierarchical structure in the living communities that were closed off from the outside world.

In medieval ladies' convents such as Quedlinburg, Gandersheim or Essen, for example, lived consecrated and non-consecrated girls as well as women called sanctimonials . In these spiritual communities they received their education and training. The sanctimonials had not only to submit to the institutional hierarchy, but also to subordinate themselves to it. By entering the spiritual community, the women made a willful decision to place disciplinary authority in the hands of the superior (abbess). The basis for this internal monastic hierarchy was formed by the Institutio sanctimonialium of the Aachen Council of 816, in which the differentiation into abbess, praepositae and subiditaeto be considered below is found.

The office of the abbess generally includes the leadership and management function of a community of women. The abbess had to take care of the spiritual as well as the material well-being of the women's community under her authority. At the same time she was also the model for a religious-moral way of life and was thus regarded as spiritualis mater by the women entrusted to her.

It was up to her to leave the community and to represent it externally if it was necessary within the framework of her duty of care for the community (e.g. administration of property, regulation of relations with the outside world, obligation to maintain court towards the emperor).

Since the foundation of women's communities, especially in the early Middle Ages, was usually carried out by noble families, the founding families reserved the right to fill the office of abbess with a woman from their ranks. In addition, the "election" of a new abbess by the community was quite possible.

The abbess was not left to her own devices in carrying out her tasks and duties. She was assisted by the so-called honor prioratus - the praepositae.

She was responsible for the administration of the food. To obtain the office of cellararia , women needed moral integrity and uprightness of character.

The life of the spiritual community of the Middle Ages was separated from that of the outside world. In order to maintain this separation, a portaria was needed. The requirements for the office were the same as for the cellararia - moral integrity and rectitude.

An important task of the custodian was to ring the bell at the canonical hours. She was also responsible for the supervision of the jewels and liturgical utensils and for the care of the wine and wafers for the celebration of Mass. The lighting of the monastery (monastery/church, minster) was also one of her duties.

The magistra (or scholastica)

The magistra was chosen from among the sanctimonials. An exemplary way of life was the only qualification required for this office. A special education and knowledge were therefore not explicitly required.

The duties of the magistra included the education and training of the young girls and women of the community. Boys could also be among the pupils. Thus, Bishop Thietmar of Merseburg reports that he received "[...] quite good instruction [...]", from his aunt Emnilde in Quedlinburg(Thietmar of Merseburg, Chronicle IV, 16).

The main learning objectives were memorizing psalms, instruction in sacra disciplinae (sacred doctrine), learning to read, studying sanctae scripturae (sacred scripture), for which Latin language and grammar instruction was essential, and teaching the monastic way of life. Within a community there was necessarily not only one magistra for the whole community, but several women could hold this office at the same time.

In addition to these offices explicitly mentioned in the Institutio sanctimonialium, there were others that are attested by medieval sources.

She was the deputy of the abbess and was the first to give her consent to legal transactions certified by the abbess. She was also responsible for presiding over chapter meetings (especially elections) and supervising the entire chapter budget.

She was responsible for the order of the choir service and had direct disciplinary supervision over the canonesses and monastic clergy. If a new abbess was elected, the decana was in charge. In the course of time this position developed into a regular leadership of the chapter.

The subiditae are the sanctimonials of the women's communities. They did not hold any special office. These women could be young girls and women who were either destined for the spiritual path of life by patria potestas (paternal authority) or chose it voluntarily. But also older women could enter the community. This was usually the case when they were widowed.

For the admission into a spiritual community the Institutio sanctimonialium provided a staggered procedure:

First, the respective candidate was examined for her suitability by the abbess. Thus the text of the Institutio san ctimonialium was read to her, "[...] since as a future sanctimoniale she must do justice to the moral-moral-spiritual postulates of the norm. "(Schilp, Norm und Wirklichkeit, p. 74) Particular emphasis was placed on the commandment of chastity as well as turning away from the outside world. Self-examination of the aspirant before admission was also an important part and she had to make dispositions of her personal property before admission. This execution mainly concerned those who were aware of the implications of their decision. Since young girls could also be admitted to the community, the Institutio sanctimonialium warns that they should not be too young.

According to these statements, children were also entrusted to religious communities of women for education. These were the so-called oblates (children consecrated to God, destined for a religious life) and children who, after the training and education they had received there, left the community to return to secular life. The warning not to admit girls too young is already found in the Regula Virginium written in the 6th century by Caesarius of Arles. It recommends admission "[...] ab annis sex aut septem [...]", consequently from the age of six or seven(Caesarii Arelatensis Episcopi, p. 7).

The Institutio sanctimonialium offers the sanctimonials the possibility to leave the community again, which, as Thomas Schilp notes, corresponded to the common practice of the time (Schilp, Norm und Wirklichkeit, p. 75f.). Only when the respective girl or woman consciously took the veil, i.e. was consecrated as a canoness, did she choose the spiritual path of life.

Men were also part of a medieval spiritual community of women. They mainly took over the fulfilment of pastoral tasks and performed the liturgical functions. It was not possible to do without male clergy, since only they could preside at the Eucharistic celebration.

Texts by Dr. Christoph Winterer (curator) from the exhibition "The Sound of Women" from 1 June 2014 to 24 August 2014 in the Collegiate Church of St. Servatii in Quedlinburg.

Who actually organizes a cemetery, helps people and sometimes just…

Who is committed to congregational pedagogy? We visited Mrs Klages in…