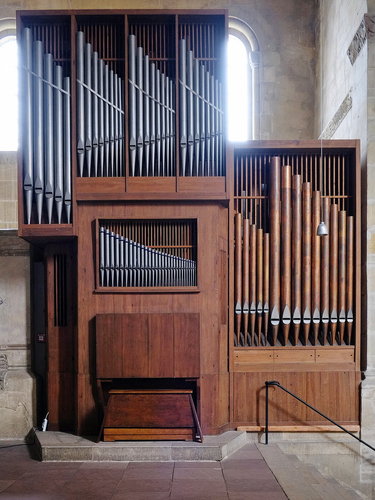 If one reads the history of the organs in the collegiate church, one gets the feeling that there nearly always were discussions about building measures on the organ.

"At the Quedlinburg cathedral

The bells ring out,

to the first choral song."

If one reads the history of the organs in the collegiate church, one gets the feeling that there always were discussions about building measures on the organ.

In order to classify the discussions that were held at that time about the current organ, let's take a brief look at the history of the organs of the collegiate church. For an overview I have carefully numbered them.

The organs I, II and III

Under Abbess Anna II a small organ I was built before 1574.

This was already "very much improved" in 1597 under Anna III - this is considered organ II. These two organs are retrospectively located before the tremolo.

From 1617 a very extensive repair and extension took place, so that one spoke of a new organ - organ III - also located in front of the tremble.

So within about 60 years three organs were built. There were probably organs here in the collegiate church before that, but the sources are too unclear.

Quite a lot of sources are available on organ IV from 1685.

In 1677 a new organ was decided upon and commissioned by Abbess Anna Sophie. She died in 1680 and could not live to see its completion. Due to this change at the decisive level, the project came to a standstill. Cantor, organist and aedilis had to come to terms with each other, which was not easy as different motives clashed.

Moreover, there was a murmur among the citizenry. Collections for this organ IV had been collected for several years without any results being seen.

And when it was finished, the organist reported dissatisfaction with the disposition and complained about several "Defecta", which the organ builder refused to remedy. (The latter even left town after being indicted! The organist was none other than Andreas Werckmeister - you may remember the Well-Tempered Clavier. He was employed as a mere cathedral organist and left records in the organ that tell us this story.

Altogether an outrageous process. Outside, at the same time, the plague was reigning, which everyone knows is very limiting.

This organ IV then stood on its own wooden gallery in the west of the nave - mind you, in addition to organ III of 1617. The latter, however, did not last long - in 1704 only the case remained and parts of the library were placed in it.

Dissolution of the Abbey and Organ V

In 1802 the monastery was dissolved and the church became a parish church. In 1812 it even became the property of the congregation by Royal Westphalian Decree, together with the organ, bells, tower, clock and all movable inventory.

A renewal of the organ was announced in 1834. However, for years the financing was lacking and there were discussions about the type and location of the organ - again the same game. The consecration of this new organ V was then in 1838. Location again on the wooden gallery in the nave. Bellows on the Romanesque gallery.

During the extensive restoration of the collegiate church in the 1860s, which gave us most of the church's present appearance, organ V was again altered and replaced.

In addition, the financing once again becomes interesting: due to the State Treaty of 1854, the royal government now had to bear the costs. Therefore the installation of a new voice and the purchase of a pneumatic machine was simply forbidden to save costs.

In 1911, less than 60 years later, negotiations began for a new organ to provide new musical possibilities. This time the discussion phase lasted until 1916, the construction phase with voting until 1920. The main part of the financing was borne by the state treasury, about 20% of the costs were taken over by the congregation.

From 1920 we can basically count organ building no. VII, location again west gallery.

In the period from 1938 to 1945 the cathedral congregation had to move to the Blasiikirche. Organ VII in the Stiftskirche was not played or at least not known to be played during this time - and accordingly not maintained. After 1945 there was a lot of damage to the building and the organ and correspondingly little use of it, so that it was then classified as unplayable in 1956 and even sold for 1500 M in 1960. The west gallery was now empty again, organ VII was gone.

And there was discussion: One wanted to remove the organ from the west gallery - it disturbed the monument, so that the "...gallery between the towers [...] is largely obstructed by a shapeless organ installation." (Hieke 1941). In fact, a decision was again sought from the state, Himmler was to decide what would happen to the organ, but by 1943 he no longer considered himself responsible for organ matters. So organ VII remained in the west gallery until 1960, much to the displeasure of the preservationists.

Now, finally, we come to the present organ VIII, whose history goes well beyond the 50 years:

As early as October 1959, the parish church council decided to restore or build a new organ in the Stiftskirche.

Particularly meritorious here is master organ builder Hans Joachim Schuke, who built 115 organs in the GDR, FRG and other countries during the same period that was being discussed for Quedlinburg.

Why was this so difficult?

The treaty of 1854 made the church state property - which is why, for the decisive authorities in the GDR, the collegiate church became an architectural monument rather than a place of lived faith. A discussion we are still having today.

In the period from 1960 to 1969 alone, 7 drafts for the organ prospectus were discussed and rejected. This is difficult because the form and location of the facade regulate the further construction of the organ.

In addition, there were negotiations about sound volume, arrangement of the works, prospect design, pipe material, the location of the organ and of course: financing.

Again and again an organ in the west gallery was rejected for tonal and architectural reasons, and in the high choir also for architectural and monument preservation reasons.

When an agreement was finally reached, a recommendation that had already been made in 1950 was implemented: an expert opinion had been prepared by an organ builder and two church music directors that determined the acoustically best position "above the tremble" in the high choir. We remember - the organs I, II and III had already stood there.

Between 1950 and 1970, however, there was another significant change - the installation of the southern treble, which was then better suited to support the organ body because of its younger substance.

The form of the organ was designed by Mr. Fritz Leweke from Halle - a clear design that follows the inner requirements of organ building without adding too much. Construction began in 1970 and was completed in 1971.

On October 10, 1971, the cathedral congregation celebrated the new organ from the Schuke company - its zero birthday, so to speak.

In the whole process Arno Bartel has to be mentioned. Blind as a child, he became cathedral organist in Quedlinburg at the age of 24 and held this position until 1980. He was directly followed by church music director Gottfried Biller and now, in his well-deserved retirement since 2017, Markus Kaufmann, whom we can hear at the organ today.

Of course, repairs, maintenance and organ tuning have always taken place. Curious are cases like in 1980 when the parish reported the theft of two organ pipes - in the GDR one could always use everything somehow.

In 1991 Christine Kunze played a guest concert on the Schuke organ on August 1st. Today she is known as Christine Bick - an integral part of the musical life of the congregation.

There would be much to tell about the "nimble manual" of the Schuke organ, to quote a cathedral organist from Bamberg, here in the Stiftskirche. Even my daughter, who was eight years old at the time, was able to inspire me with a song here at Christmas time.

Now we have added a new stop in the current year: "Oboe 8'" - started in November 2020 and finished this year 2021. You can see - good things take time. Compared to the duration of past rebuilds, this is almost nimble.

One can close with a quote from a newspaper from 1991:

On a "cool October evening" a concert with 150 visitors took place to celebrate the 20th birthday of the organ. Musician Christoph Mehnert from Hamm in Westphalia played on this organ for the first time and soberly assessed: "It is not a bad instrument. For the year 1971 even quite good."

Who actually organises a young congregation, helps people in hospital…

Who oversees the church district? We visited Mr. Schilling in…